Recently, The Sangfor Security Emergency Response Center and Endpoint Security Team caught a new ransomware sample that Sangfor FarSight Labs has named “Hauhitec”. According to gathered threat intelligence, many companies in China have been attacked by Hauhitec, especially in developed coastal regions. The attack characteristics and behavior of the group are very similar to the Anonymous group, and it is believed that this group has opened a new branch.

The attacker used the " EternalBlue" vulnerability (MS17-010) and WMI, to propagate across the intranet. After a successful attack, the attacker used Powershell to run malicious programs for encryption and extortion. FarSight Labs named the ransomware Hauhitec, based on the encrypted file suffix.

The Anonymous group first appeared in March 2019. In the early days, it mainly infiltrated using the EternalBlue vulnerability and used the endpoint’s resources for mining. In August 2020, they updated their Rootkit, and after invading a system, a botnet was set up to conduct long-term mining.

After the discovery is completed, the intranet is attacked to obtain permissions on other hosts. This is a rare extortion method that exploited the EternalBlue vulnerability, to spread laterally (horizontally) across networks in recent years.

In addition to exploiting the EternalBlue vulnerability, the attackers also used a variety of methods to carry out intranet attacks. Judging by the "k8gege" feature, the attacker maliciously used the k8gege toolkit to attack the victim.

The attacker uses WIMEXEC to send PowerShell commands to other hosts on the intranet for execution.

Security researchers discovered that by decrypting base64, the command exists in a resident form and performs file downloads every 20 minutes.

Dump the file, and see the data is in decimal ASCII code.

After decryption, it is seen that key parts are still encrypted by base64 and need to be decrypted again.

The action involves downloading nc.jpg from the C2 server.

As the content of the nc.jpg is also encrypted using base64, it is important that the file is decrypted in the correct sequence. There is an MZ header, and the program is confirmed to be a dll program according to relevant characteristics of PE. 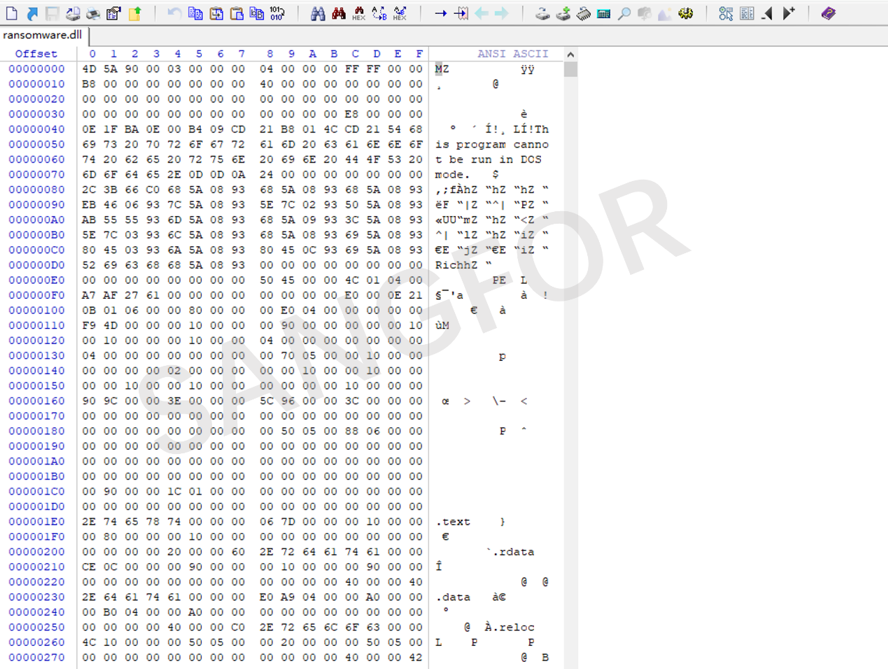 The dll will look for, and create, the svchost.exe process. The shellcode is copied into the memory to the heap space.

The first copy shows that the program mainly splices the contents of a PE file. 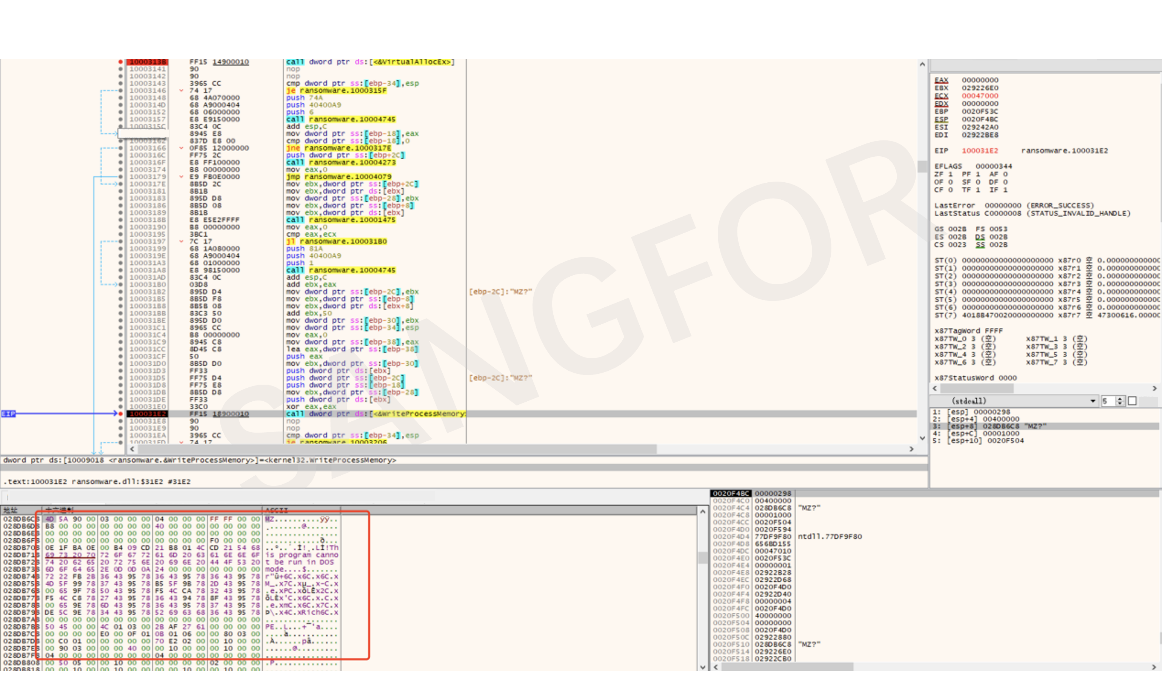 Finally, the process injection is implemented which injects the shellcode code into the process of the created svcshot.exe. 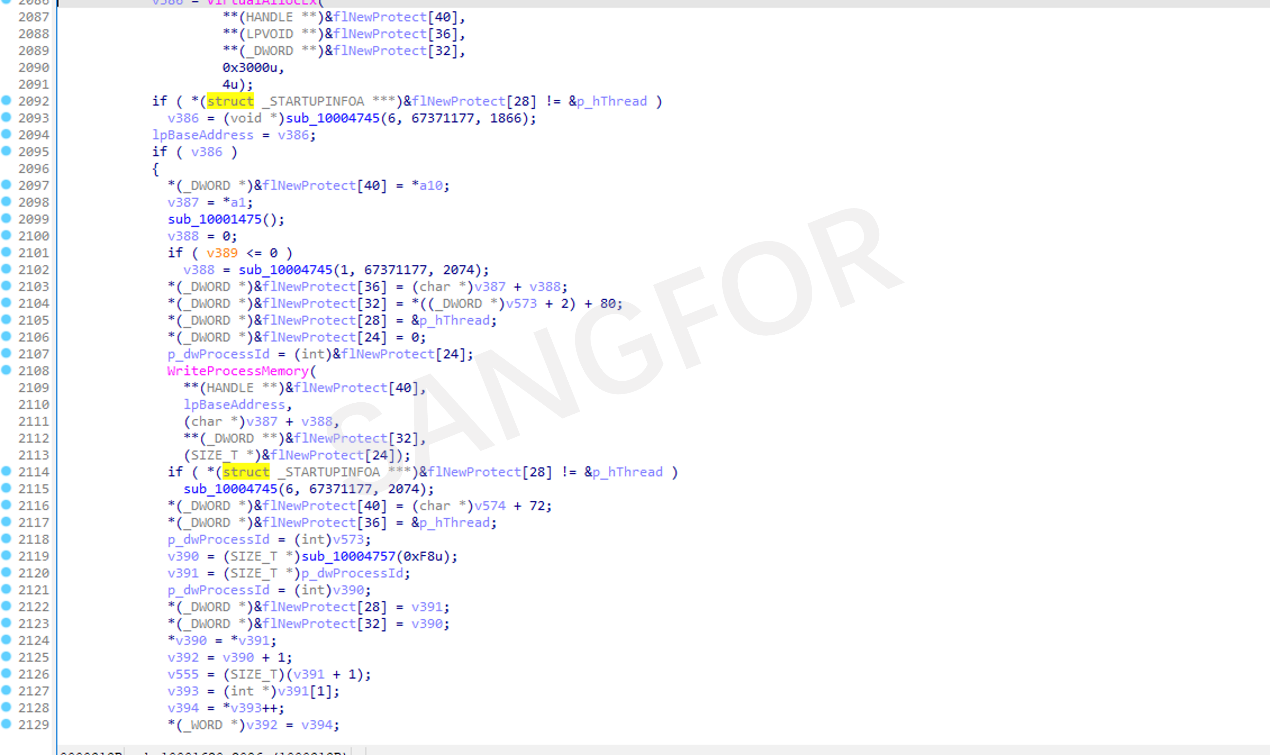 The thread is restarted to execute the shellcode.

The debugger is used to load the svchost.exe process and dump the injected shellcode. 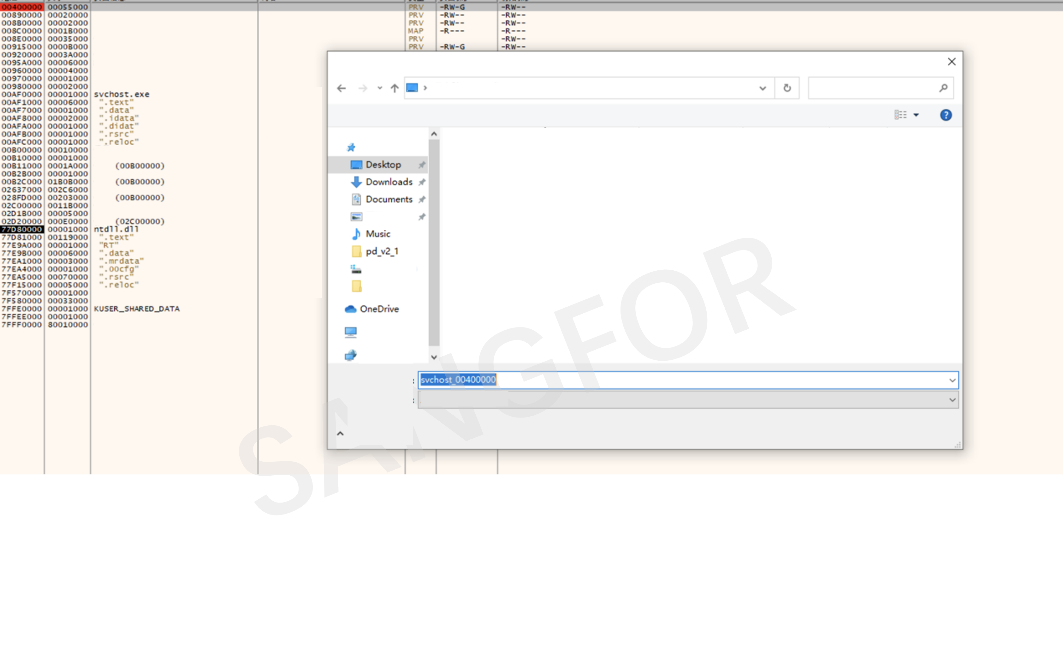 The main function of Shellcode: 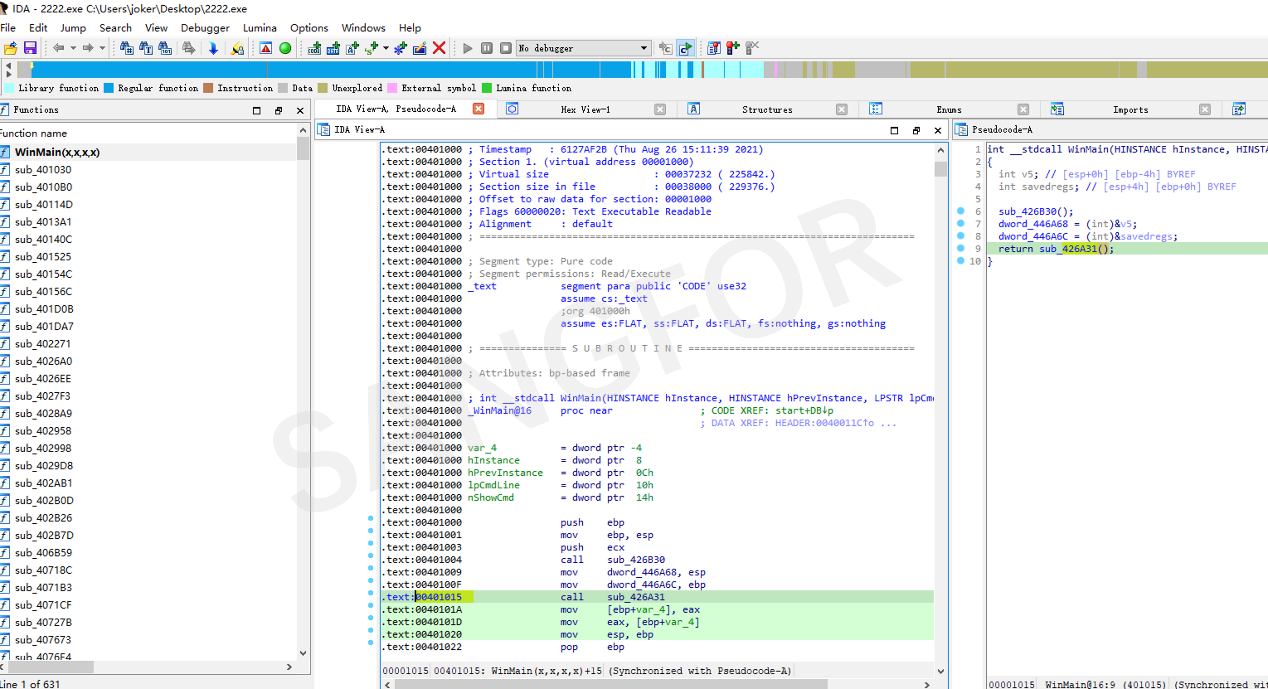 There are many empty functions, but the main function exists in sub_401030. 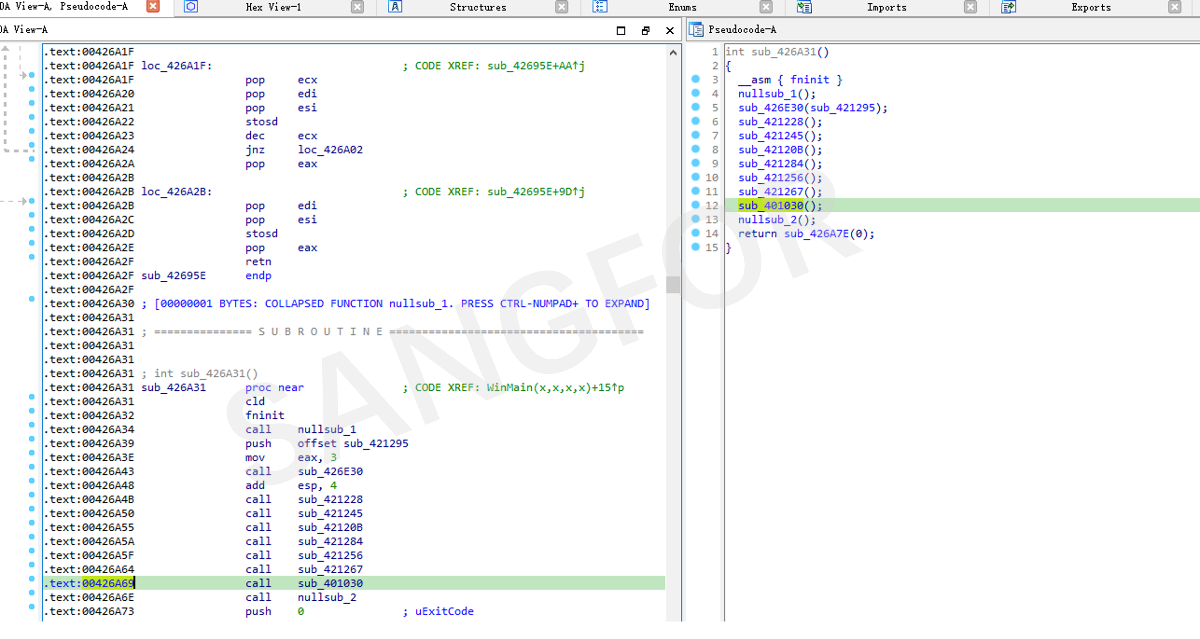 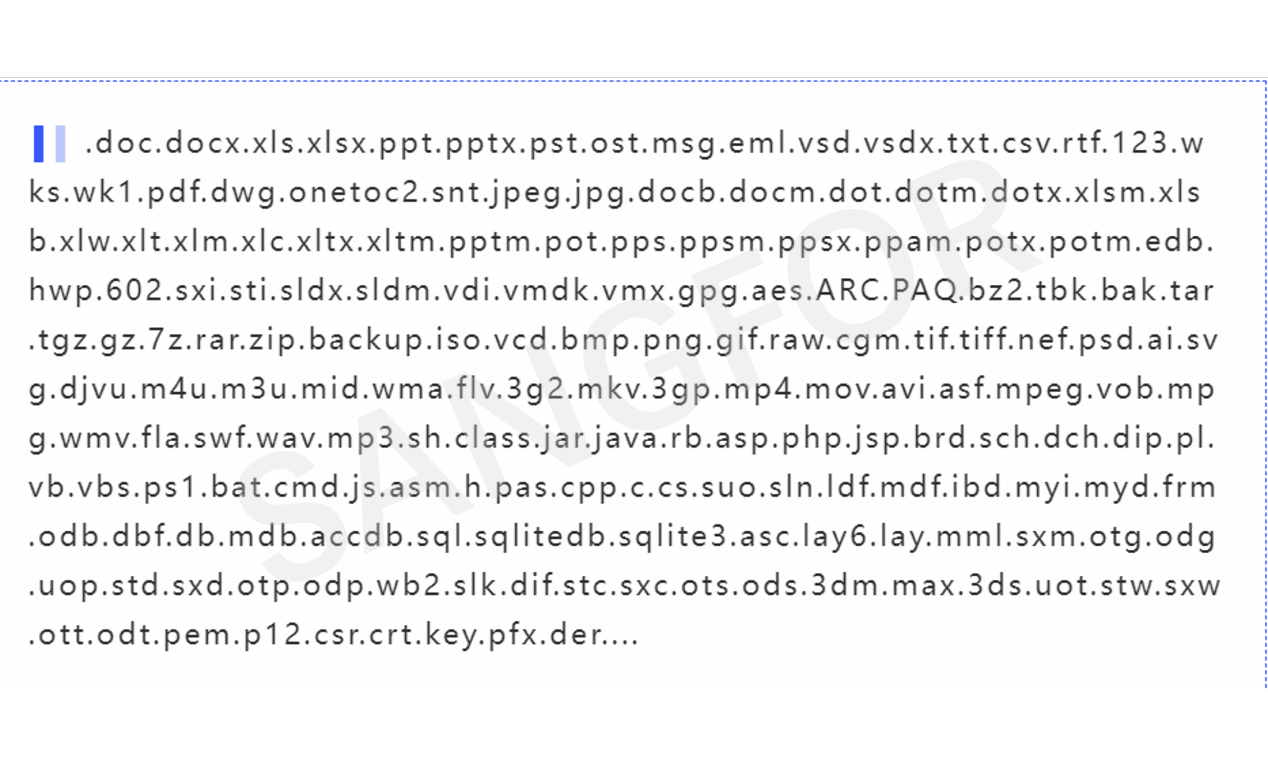 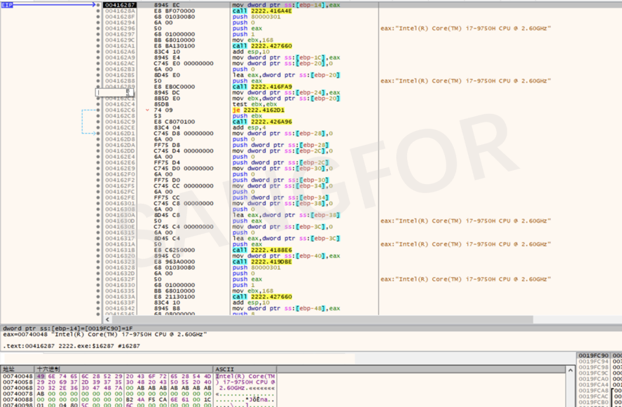 Determine whether it is a server.

Upload the information and set filename as txt file, spliced with host name.

If the upload is successful,  the attacking group will use the data to determine whether host information is a server and adjust the extortion accordingly. 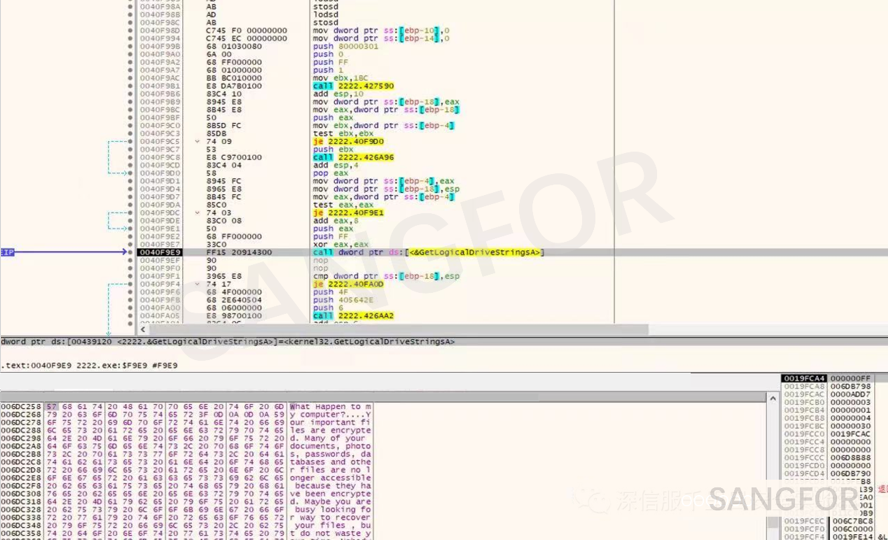 Determine how many drive letters exist on the hard disk.

A ransomware file named RESTORE_FILES_INFO.txt is generated under each drive letter 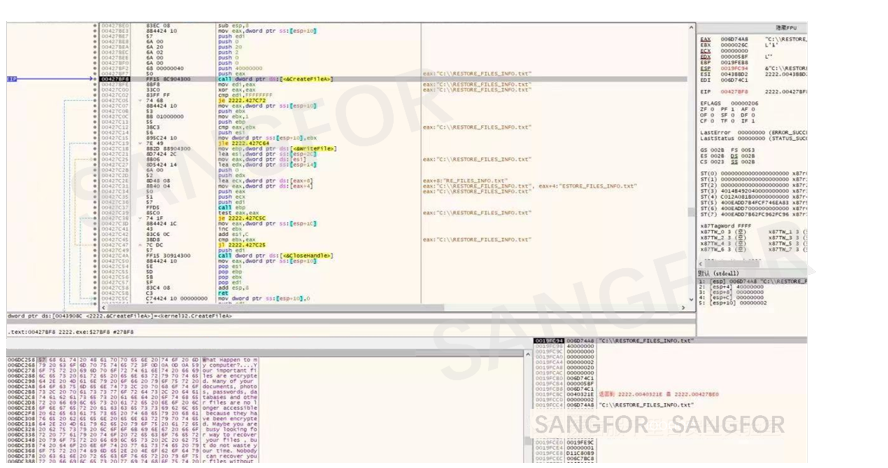 The generated ransom note includes a key which has been generated in the early stage of the sample run. As an identifier for each run, the hacker will provide a corresponding decryption tool based on this identifier.

Before encryption, the relevant services and some content related to the extortion are closed, and xm.exe is added to the task list.

Exclude the filtered directory and suffix from encryption and check for information about the MS17-010 vulnerability.

Search all files on the C drive and encrypt the files that do not match the directories and suffixes above. 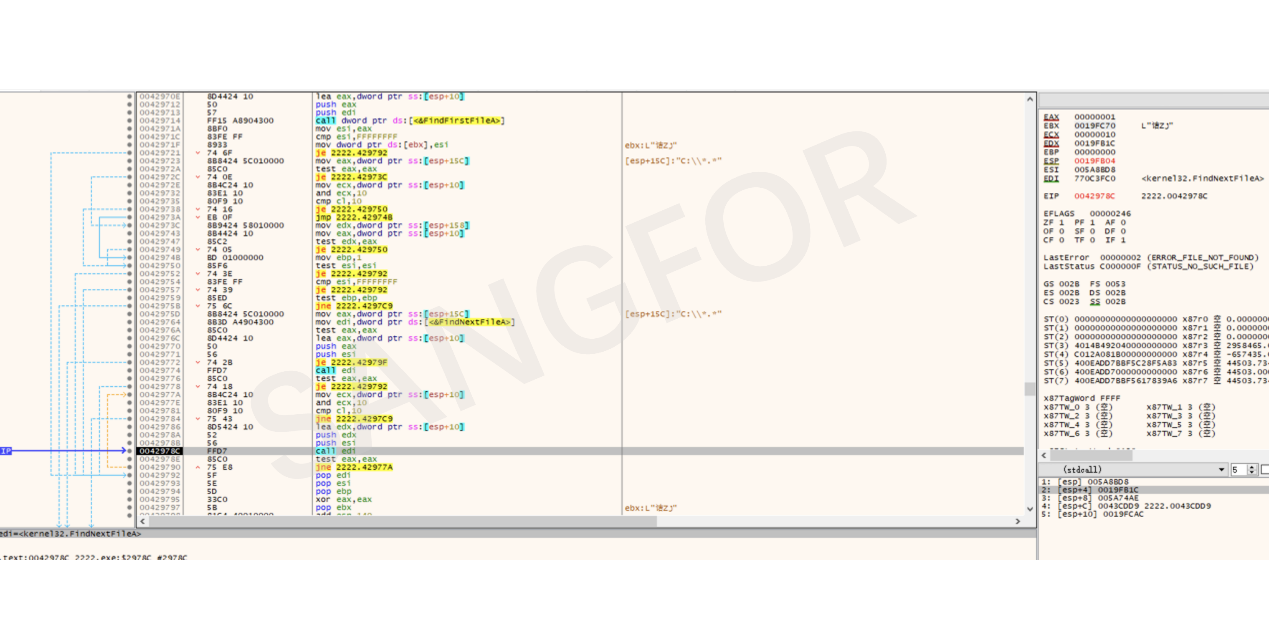 The program loads the file into memory, and the current file state is determined before encryption. 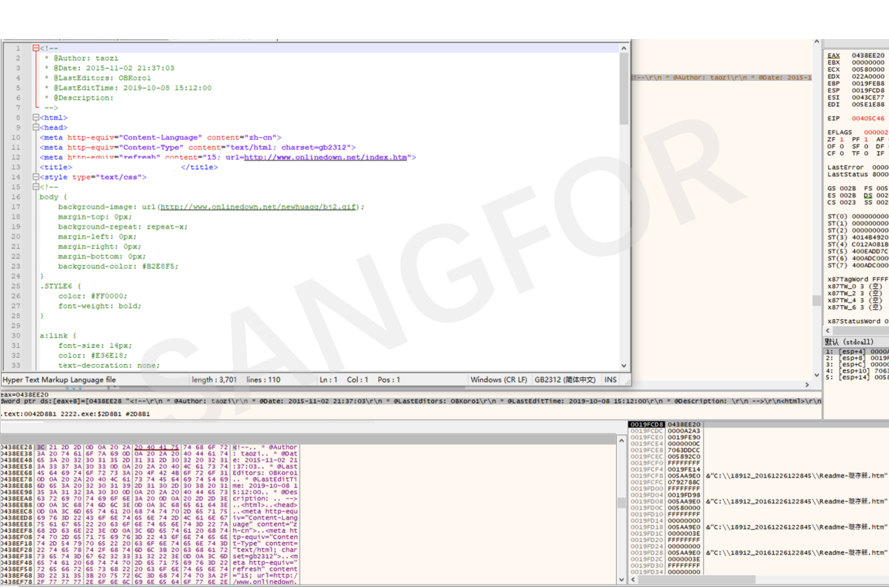 Initialization before encrypting the file. 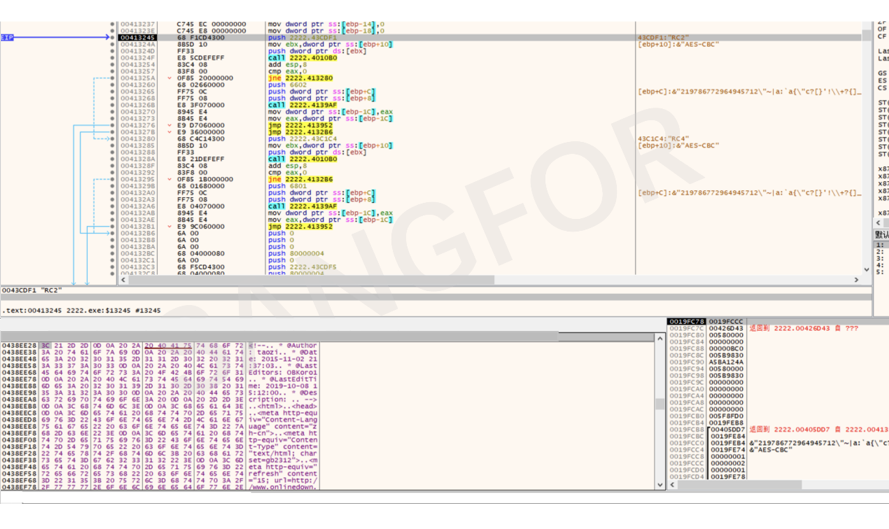 Encrypt files to be extorted.

The ransomware was found to have encrypted only a portion of the file's content, and the encryption key was written to the end of the file. 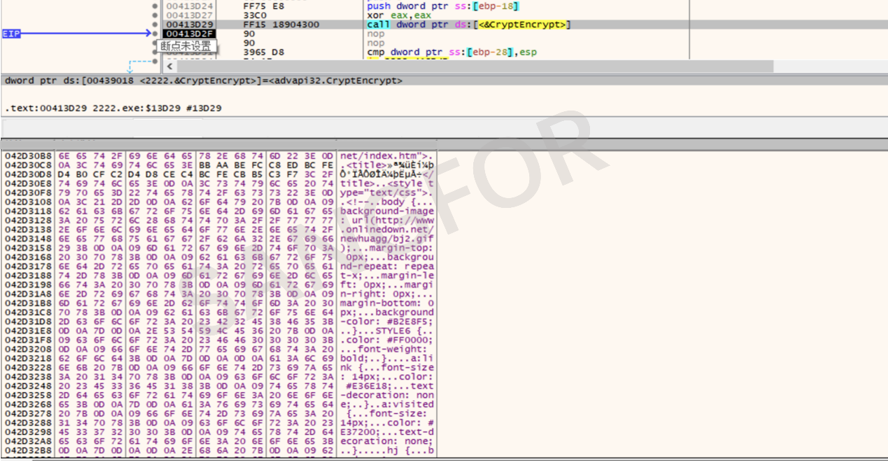 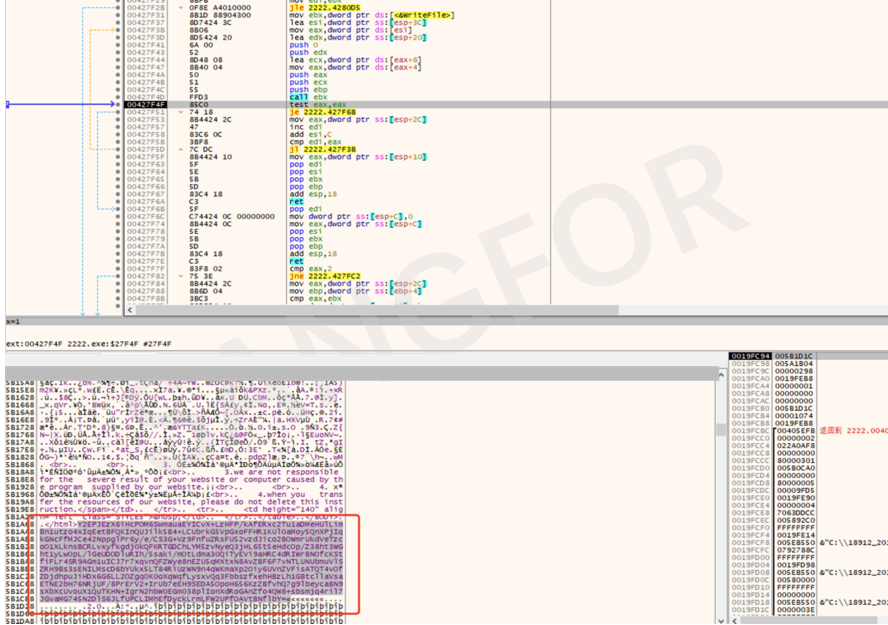 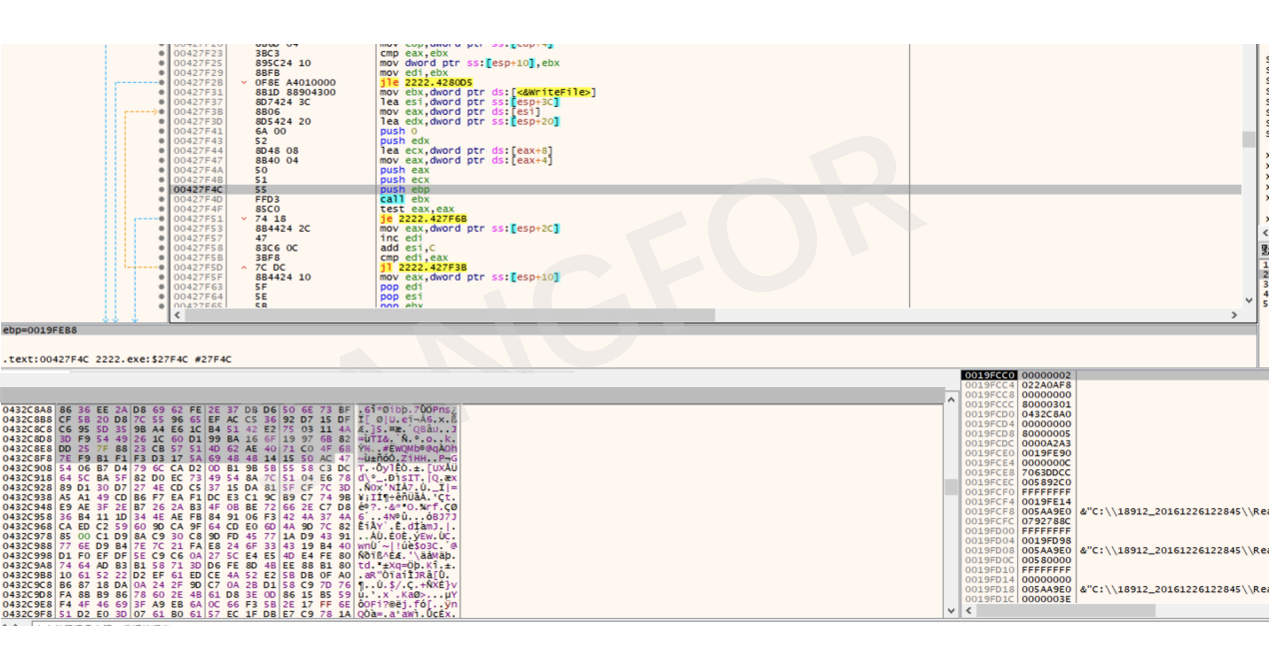 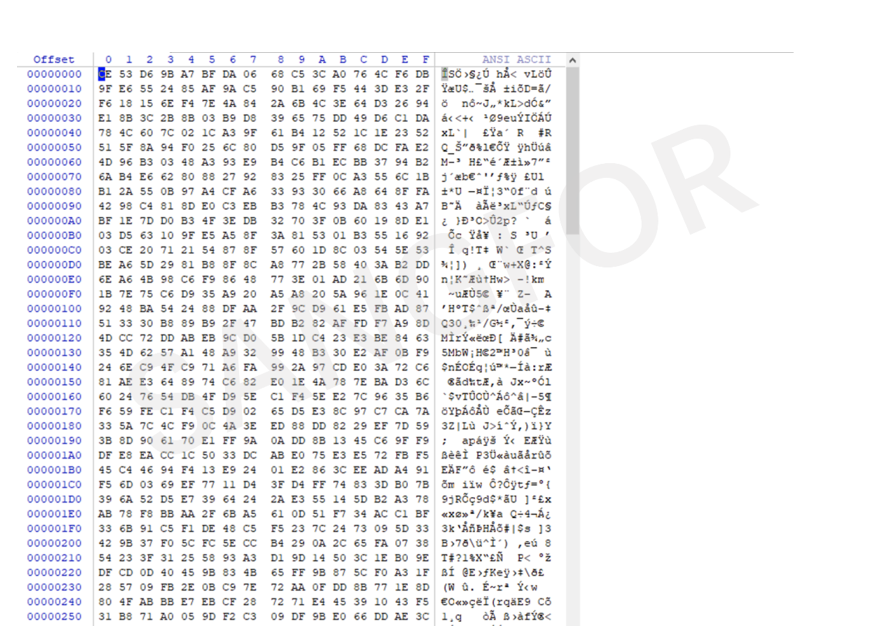 Compare the file size. If the file is larger, add the suffix directly, without encrypting it.

If the encrypted file is small, it will be encrypted, and the suffix information is appended. 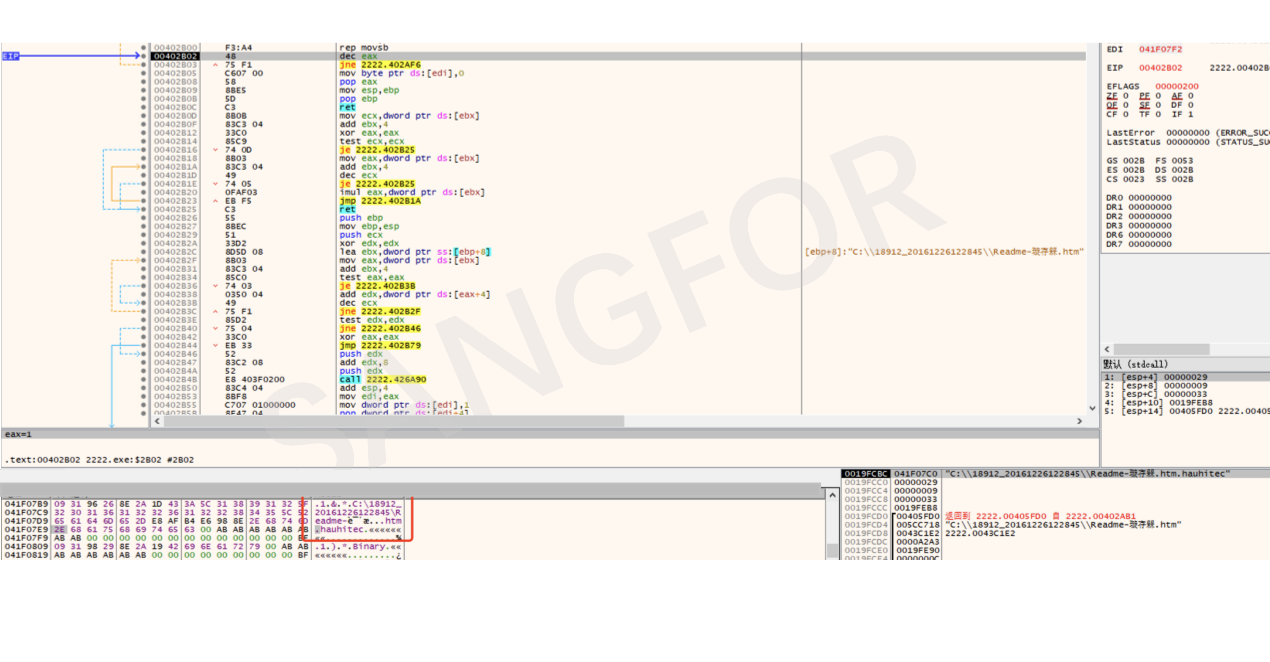 Move the file and add the ransomware information to the file suffix.

After the encryption is complete, ransomware note is created in the directory of the encrypted file.

Run until all files are encrypted. After the encryption is complete, clean up the corresponding volume shadows, logs, and task schedules. 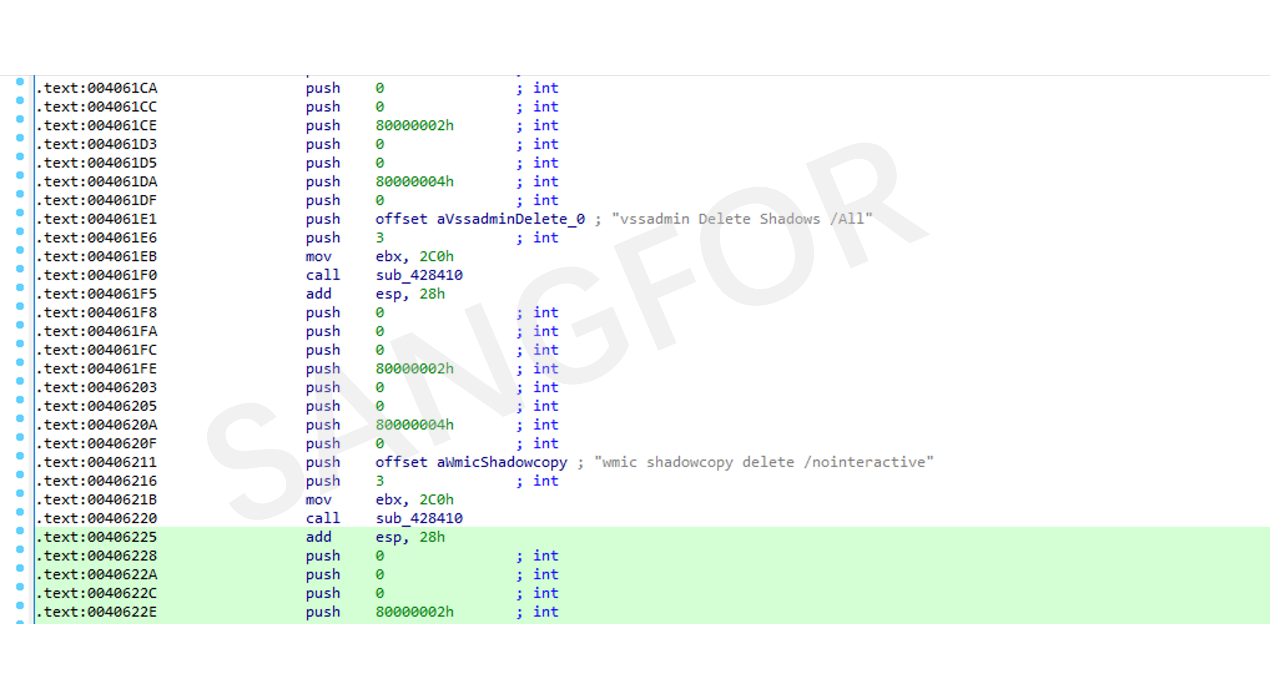 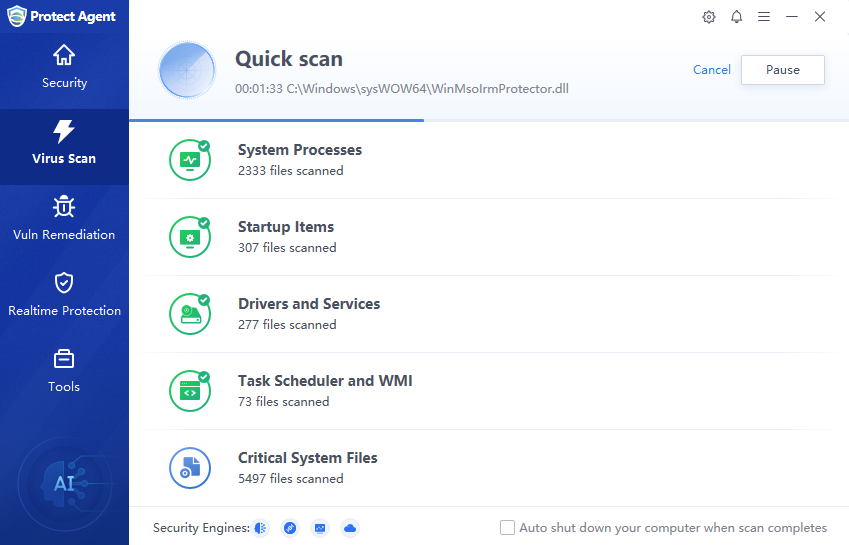